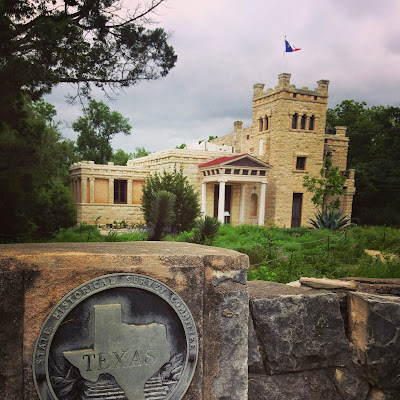 The Elisabet Ney Museum is the former studio and portrait collection created by 19th century sculptor Elisabet Ney. In 1892, Ney (1833-1907) purchased property in Austin, established a studio named Formosa and resumed her career as a noted sculptor of notables.

At Formosa, Ney sculpted legendary Texans, among them Stephen F. Austin and Sam Houston. Ney also assembled at her American studio portraits of European notables, including King Ludwig II of Bavaria, Otto von Bismarck, Arthur Schopenhauer and Jacob Grimm rendered from life as a young artist in Europe. At the turn of the 19th century, Elisabet Ney’s studio became a gathering place for influential Texans drawn to “Miss Ney” and to the stimulating discussions of politics, art and philosophy that took place there.

The museum consists of a few rooms, an upstairs and a small tower. The grounds allow you some space to explore, including Waller Creek towards the rear of the property. In addition, across the street is Shipe Park, Pool and Wading Pool, with swings, a basketball court, a playscape and a field for playing. You can usually find some shade for a picnic.

About the author: A recovering workaholic, Nicole Basham now spends her time rediscovering Austin through her 9-year-old son's eyes. A soccer-playing mom, Nicole also enjoys tickling too close to bedtime, taking in some live music and being silly. You can also find her writing at LiveMom.com and FreeFuninAustin.com.
Posted by Nicole B. at 9:00 AM